Built to Last: 3 Successful Partnerships Between ALA Members and Business Partners

The value of the relationships between ALA members and business partners is often one of the top benefits listed when it comes to ALA membership. The end result is the ability to quickly connect people together to solve problems. This article highlights three success stories for three ALA members that each had a need that business partners were able to meet. Jerri Buchtel of Frazer Ryan Goldberg & Arnold, LLP (FRGA), an active member of the Arizona Chapter, had a unique challenge. Back in 2016 at her partner retreat, her firm was in growth mode. She was tasked with figuring out how to either find a new space or expand their current space to accommodate more people by 2019. Their current lease did not expire until the end of 2020. She did what all experienced ALA members do: Headed to the ALA Annual Conference & Expo and hit the Exhibit Hall in search of help. She met Tiffany Winne of Savills there for the first time. Savills had recently opened a Phoenix office and was very excited to help.

The office market in Phoenix at the time was very heated, so landlords were not very accommodating. Jerri had met with her previous broker, but they were not in a hurry to help because of the time left on her lease. There was no obvious path forward, so Jerri needed to be creative. Tiffany quickly saw that waiting was not the answer for FRGA and wanted to make sure they had options.

Right after Annual Conference, Tiffany researched the analytics and developed ideas regarding possible strategies for solving FRGA’s challenges ahead of their lease expiration. Their goal was to go from 15,000 square feet to 21,000 square feet, but not risk having to pay rent in two buildings at once. Tiffany and Jerri developed some out-of-the-box ideas, and together presented them to the FRGA partners. Because Savills is the only global firm with a pure tenant focus, they can negotiate in a different way and often push boundaries on what’s possible in office leases. They also continued to provide information throughout the process. Savills knows this is particularly important for law firms, who tend to make decisions in a very analytical way and want to tap into what other peer firms are doing and compare their decisions before making long-term commitments.

Tiffany saw firsthand how FRGA allowed Jerri to take the lead on the project, which freed the partners to practice law. According to Tiffany, she guided the process, but Jerri was the leader within her firm. Having worked with many law firms, Tiffany has seen too often where too many voices lead to problems. Tiffany was impressed with the credibility Jerri had within her firm, and how Jerri used it to lead her attorneys to a great solution. On the other hand, Jerri saw firsthand how Tiffany and her team were able to negotiate the right solution so the firm could relocate to a superior quality building, 16 months prior to their lease expiration without ever paying double rent. It was a win-win for all sides.

One take-away for members? Office leases are more flexible than most firms realize, and creative structuring is often possible. 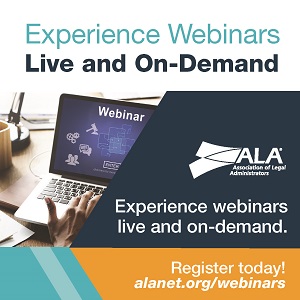 Two years ago while April Campbell, JD, was Director of Administration at McCullough Hill Leary, PS (MHL), she quickly realized the firm needed a new back-office software system. As an active member of ALA — having served in many leadership roles the Seattle Chapter, as well as on the International Board of Directors, including as the 2018-2019 President — she’s developed a lot of valuable business relationships, even with those business partners that had nothing to offer her firm.

After being introduced to various software programs at the Annual Conference, and then doing her due diligence, the firm selected Centerbase. Centerbase provided April with a list of consultants/certified partners they recommended MHL work with on the implementation. As soon as April saw the list, she knew she would call Affinity Consulting Group, LLC, and Debbie Foster to be their partner. When April selected Centerbase, she didn’t even know that Affinity worked with Centerbase, but April and Debbie have had a relationship for years through ALA. That relationship is what prompted April to call Affinity.

Affinity’s team took the time to understand how MHL was using their current software, discussed the opportunities to work more efficiently, and then helped April and her team transition to the new ways of getting work done in Centerbase. They helped her team with optimized workflows and provided training for the firm. The nice thing about working with a consultant, rather than directly with the software company is that if the firm had a need for something that didn't work within Centerbase, the consultant could solve the problem with other resources. April’s management of the implementation allowed everyone else in the firm to see Centerbase and Affinity as one, and that the transition from their old software to the new one was relatively seamless.

April and the Affinity team learned many lessons as they worked together during the implementation. Perhaps the most important lesson is that the accuracy of a conversion is critical to the success of the project, and it made sense to take the necessary time to get it right for the firm. Having six months to complete the process was ideal for this project, and having a consultant April could trust to work with her through the process was invaluable.

Debbie has seen that overall, ALA members and their firms tend to trust an ALA business partner a bit more out of the gate and are generally more open to their recommendations. There is a level of credibility to the ALA member when you are a business partner that is often overlooked. Also, while Debbie was the person that April originally reached out to, it was other members of her team that worked closely with April to get the software program implemented.

The lesson here for business partners? Build relationships and recognize that your personal brand can lead to an introduction to your business brand. And the final lesson — build relationships with everyone you can, no matter what size firm they happen to be with. Jobs change, roles change and people change — and you never know where the next opportunity lies!

Laura Sears, CLM, with Gould & Ratner LLP, an active member of the Chicago Chapter, started preparing for her firm’s move long before it happened. Laura had an idea of the kind of upgrades she wanted to make, and one of her goals was to implement a keyless entry solution. Courtney Liptrot with Kastle Systems has been a business partner of the Chicago Chapter for about three years, and Laura knew she wanted to include Courtney when their keyless entry/security system went out to bid.

Courtney added quite a bit of value through the proposal and scoping part of the process, giving Laura a much better understanding of what the options were. Laura already liked and trusted Courtney because of their relationship through the chapter, but understanding more about Kastle’s experience in working with 80% of the top 200 firms in the country was extremely helpful to Laura in choosing the features and options available.

One thing that stood out to Laura and her team that directly influenced choosing Kastle as their security partner was the promise of the level of support they would receive after the implementation. There were several vendors who could have installed the system, but the assistance after the fact, as well as the reviews and ratings Laura found for Kastle’s technology and customer service, really made an impact and fit with what Laura wanted to accomplish.

Kastle implemented a managed security platform for Gould Ratner that included, among other things, hands-free access control to the offices. Courtney called this implementation “my baby.” It was her first project with a member of the Chicago Chapter, and because she knows how close ALA relationships are, she knew this needed to be a success story. She was very involved throughout the process, regularly checking in with Laura to ensure things were going smoothly and that Laura had everything she needed.

Laura had quite a bit to juggle during the move, and it was a relief to know that Courtney and her team at Kastle were committed to the success of the project. A year later, Laura has no regrets about her decision to select Courtney and Kastle for the security needs of the firm, and Kastle has continued to support Gould & Ratner’s needs, making them happy customers!

There are thousands more amazing stories like the three we outlined above. The partnerships between ALA members and business partners can be incredibly valuable to a firm, while saving time, frustration and money. When your firm is in need of a product or service, turn to an ALA business partner — and watch the magic happen!

Debbie Foster is a Partner at Affinity Consulting, an ALA VIP Business Partner. She's also the Incoming Chair of the Business Partner Relations Project Team.
Email
Linda Quindt, CLM, is the Firm Administrator for Finch, Thornton & Baird, a 32-attorney firm in San Diego. She has been an active member of ALA since 1991, serving on numerous committees, including as the President of the San Diego Chapter, Director on the Association Board of Directors and — currently — a member of the Business Partner Relations Project Team. She is also an instructor at UC San Diego Extension, teaching paralegal career development.
Email
LinkedIn

Built to Last: 3 Successful Partnerships Between ALA Members and Business Partners

Setting Laterals Up for Success