At ALA News About ALA

What's Happening at Headquarters May 2019

A big thank you to the nearly 900 attendees and the more than 160 exhibiting companies at the 2019 Annual Conference & Expo in Grapevine, Texas. We hope you walked away with plenty of inspiration, new connections and cutting-edge solutions that you can use to enhance your career and put into practice at your law office.

With the close of the conference, new volunteer members officially join ALA’s standing committees and the new Chapter Resource Team. President James L. Cornell III and the 2019–2020 ALA Board of Directors also took office. Click here to view the complete list. We’d also like to give a special thanks to the 2019 Annual Conference Planning Committee for all the work they did to make Grapevine a huge success! Click here to view the entire conference photo collection 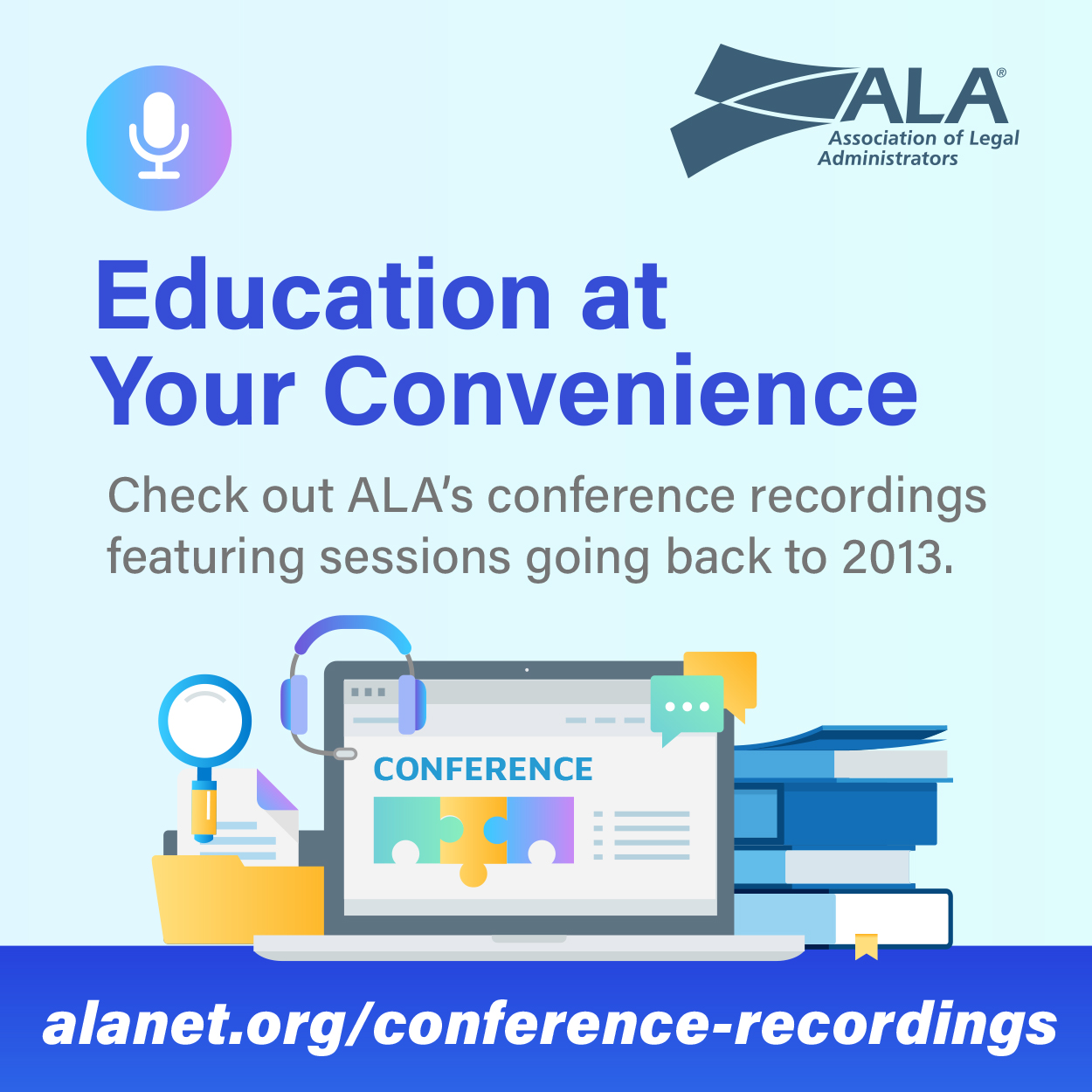 The New York City Chapter Gets Its 60 Seconds of Fame

Congratulations to the New York City Chapter! Their Broadway-inspired video received the highest ratings from the voters in the 60 Seconds of Fame! contest. The minute-long video showcases the value of ALA membership while referencing at least 12 different musicals. Watch it and all the other entries on ALA’s YouTube channel. Congrats to Our 2019 Award Recipients

On April 17, conference attendees came dressed in their best “denim and diamonds” to attend the closing festivities, which included the honoring of award recipients at the Association Awards Gala.

The Elevate ALA Award recognizes up to three chapters whose efforts in professional development, networking and visibility demonstrate advancement in the areas of educational content, member-to-member and member-to-business-partner relationships, and ALA’s prominence in the legal community.

The first recipient was the Calgary Chapter. According to the chapter’s submission, the key to success is strategic planning and an enthusiastic and energetic board. In late 2017, the chapter invested in a facilitated planning session to reevaluate its values, mission and goals. Implementation in 2018 focused on member engagement and growth, professional development, networking and visibility — and clearly it has paid off. They have since opened subsections to all members, not just those specializing in a particular area; implemented the distribution of summary notes to all members; taken a new approach to business partner engagement; and began a new member mentorship program. The next recipient was the Houston Chapter. The Houston Chapter is highly focused on its members’ professional development needs. It provides a high level of education that’s structured to ensure members can adequately prepare to take the CLM exam and also ensures members have access to all the credits they need for recertification within a three-year window. They even offer a biannual CLM workshop to cover the core competency areas. Additionally, the chapter’s Strategic Relations Committee participates in legal association round tables within the Houston Bar Association and recently sent representatives to the University of Houston Law Center’s “Alternative Legal Career” Fair. Local educational events were also published in the HBA monthly newsletter. And all at no cost to the chapter. The final recipient was the Mexico Chapter. The dynamic of the legal community in Mexico is, as you might imagine, different from what we’re accustomed to here in the States. The goal of the chapter’s Board was to position the chapter as a highly reputable arm of a strong international association. They aim to provide local content to the community, content with a common theme among Mexican and International firms, to their target audience — partners and owners in charge of the administration of firms.

By way of example, in May of last year the chapter executed a forum consisting of three panels. The first involved the owners of the five most recognized and awarded firms in Mexico. This panel was focused on transforming the business model of the Mexican law firm and what might be necessary to remain competitive in an evolving market. The second panel included four senior general counsels and one CFO. Its focus? What companies are expecting from law firms. The third panel included deans from the top five universities in Mexico. They were asked to consider how to bridge the gap between the theory taught in universities and the “real world” their students would experience in law firms.

The Mexico Chapter was formed in 2016 and, in just three short years, has really had an impressive impact on the local legal community. Congratulations on a job well done! Each year the Board of Directors identifies members who have made significant contributions to the Association. This year, they recognized five recipients:

The first award goes to Julie S. Logan, SPHR, SHRM-SCP, of Newmeyer & Dillion, LLP, in St. Louis, Missouri. Julie joined ALA in 1998 and by 1999, was already involved in planning her chapter’s education. She went on to serve in various roles within a few chapters — she’s moved around a bit over the years — including as Chapter President on three different occasions. At the international level, she has served on Regional Leadership Teams, many HR Conference Planning Committees, the Board of Directors, the Nominating Committee and, most recently, the Job Description Toolkit Task Force. Grapevine marked the beginning of her three-year term on the Membership Development Committee. Julie’s contributions at both the local and international level span decades and are greatly appreciated. The next award went to someone whose passion for this organization is evident. She thrives on challenge, has mentored many new members and volunteers and is a strong advocate for the Certified Legal Manager (CLM) program. She is a brave leader who creates a courageous culture. Katie J. Bryant, CLM, of Udall Shumway PLC in Mesa, Arizona, joined ALA in 2000 and began serving at the local level not long after. She’s held countless chapter roles, including Chapter President (this year will make it twice!), and was instrumental in developing BizLaw in a Flash, a mobile flashcard app created by the Arizona Chapter through a grant from the Foundation of the Association of Legal Administrators. At the international level, Katie has served as a Regional Representative, on the Association Nominating Committee, on multiple conference committees, chaired the Regional Nominating Committee and served on the Board of Directors for four years. She is currently serving as Chair of the Business Partner Relations Project Team, which is thriving under her leadership.

The next award went to a longtime member who was one of the founding members of the Middle Tennessee Chapter and an active participant in ALA’s Large Firm Administrators Group. Teresa J. Walker of Waller Lansden Dortch & Davis, LLP, in Nashville, Tennessee, has gone above and beyond for this organization. She was on the Board for many years, served as ALA President in 2015-2016, and is currently serving on the Professional Development Advisory Committee. In fact, she was recently appointed Vice Chair. Teresa is a mentor, model volunteer and, in her words, a blockchain enthusiast.

The next award went to a member who is laser-focused on promoting ALA’s CLM program. Mary Ann Rojas, CLM, SPHR, SHRM-S, of Pugh Jones Johnson, PC, in Chicago, Illinois, was the driving force behind the Greater Chicago Chapter’s study group, took the time to prepare practice tests for the chapter and has since developed a web-based study group to expand its benefits beyond the Windy City. Additionally, she was recently appointed to serve on the Certification Committee. (Not pictured.)

The final Outstanding Association Volunteer Award went to a recently retired member, W. Scott Peterson. For years prior to his retirement, Scott was a frequent contributor to our discussion forums, constantly providing document samples and guiding members toward resources and information. His contributions and insight were extremely valuable and greatly appreciated by many. (Not pictured.) The Quest Award recognizes a new member of ALA for their conviction, dedication and relentless pursuit of personal and professional excellence. There were more than 700 eligible candidates this year, 18 of whom were nominated by their chapters for this recognition.

This year’s recipient is Parker M. Ramey of Zupkus & Angell, PC, in Denver, Colorado. He engaged in chapter activities right away, as evidenced by his attendance at a Mile High Chapter retreat just a few months after joining in 2017. He began interacting with other members instantly and almost immediately volunteered to serve on a committee. Not long after, he was appointed to serve as co-chair of his chapter’s communications committee. According to his fellow chapter members, his attitude was exemplary and his initiative was endless as he assisted in upgrading the chapter’s website, escalating the chapter’s social media presence and deploying the chapter’s mobile app.

Parker has proven that he is a strategic thinker, a hard worker and a professional in tactical deployment of difficult and technical initiatives. The Mile High Chapter is thankful for his contributions, indicating that he has set the standard for new member engagement. And we couldn’t agree more. Spirit of ALA Award

The Spirit of ALA Award recognizes members who personify leadership, commitment, tenacity and dedication. ALA’s Board felt this award should be the Association’s highest honor and given only to those whose leadership and contributions are extraordinary. In fact, the Spirit of ALA Award is not an annual event but rather an honor that is given on occasions as rare as the individuals who receive them. In 1998, David M. Brezina became the award’s first-ever recipient. This year’s recipient, Judith A. Hissong, CLM, has decades of volunteer experience with ALA at all levels of the organization — she was even the fill-in David M. Brezina Memorial Session speaker in 2018. She’s currently serving as our new Membership Development Committee Chair.

Named in honor of ALA’s Past Presidents, the Presidents’ Award of Excellence is a performance guideline used to encourage chapters to take effective and collaborative action in support of the Association’s mission to promote and enhance the competence of legal management professionals; improve the quality of management in law firms and other legal service organizations; and represent professional legal management and managers to the legal community and to the community at large. ALA recognized 61 chapters that have achieved this honor thanks to their hard work throughout the past year. They and their chapter leaders deserve a tremendous amount of credit and respect.